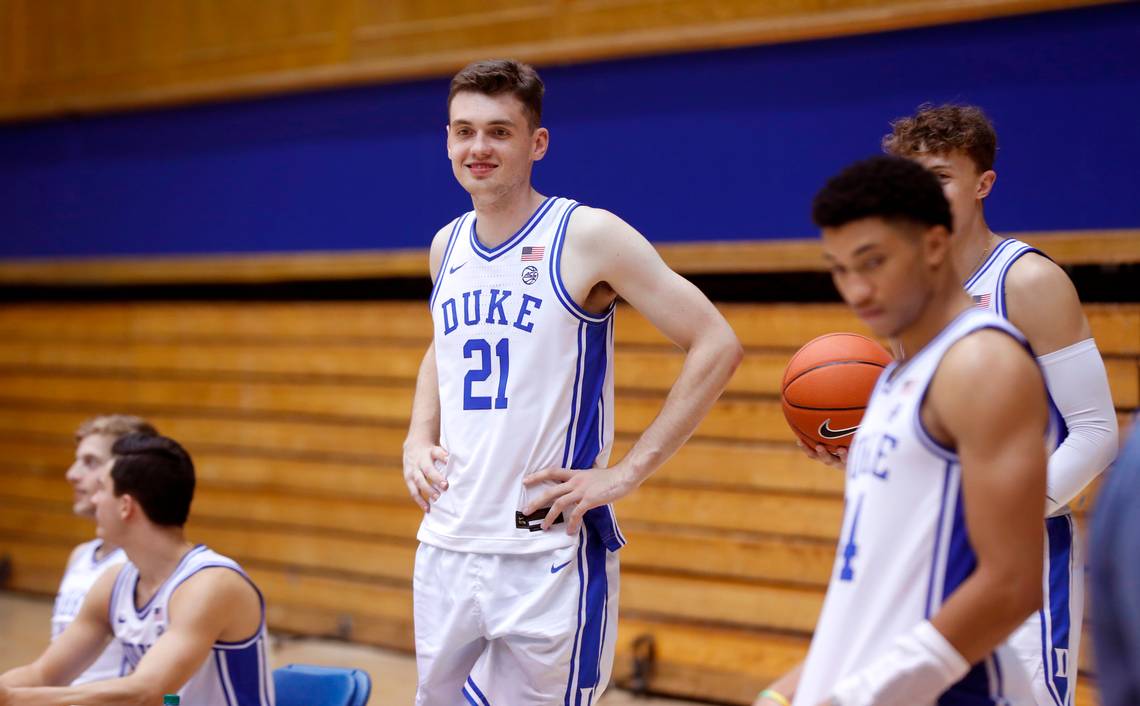 Quotes & Notes from the Duke’s Victory over Miami

Opening Statement: “We played really well. Our guys responded. We had a heck of a day yesterday with our team from 7 in the morning to 10 at night with a couple of practices, meetings, just good stuff. They grew from it – all positive. They responded. They’re fighting human nature because we beat them by a lot, but since then they’re down by four against Louisville with four minutes. [Miami] probably should’ve beaten Florida State. They’ve been playing well, so we showed them stuff from those games. They were a mature team tonight. We got back to playing defense.”

On Duke’s defense: “We just concentrated more on it. In our six wins, we’ve given up 60 points. In the two losses, we gave up 79. We talked to our team about that. For us to win we have to play good defense. If we’re playing that hard on defense it translates to good offense – then we’re pushing the ball. At the start of the game we had a lot of energy. Second half, you’re playing at 10:30 at night with a big lead – it’s tough for both teams. Overall, our defense was really good and we didn’t turn the ball over as much. Those are things the defense can’t defend. We gave about four buckets on that.”

When asked about three-pointers: “It was open. Our guys were with a lot of energy. Matt [Hurt] has been working really hard on increasing the speed of his shot – his preparation. I think it paid off for him tonight.”

When asked about Duke’s pressure on Chris Lykes: “We just played really good defense. [Chris] Lykes is a heck of a player and in the second half he showed more. We just had a couple of good games against them. He got that little spurt going – then he can go 15 quick. He’s one of the quick scorers in the league – big time.”

When asked about Duke’s energy: “They really responded to the two losses in a positive way. Our practices yesterday were excellent. Our team meetings – I think we grew a lot as a team and I think it showed today. We got a little bit of a break from competition. Wendell [Moore Jr.] still won’t be ready by next week, but that’s a week we don’t lose a game with him. That’s a good thing. It does give some of these other guys a chance – Joey [Baker] has been playing with a sprained ankle – for us to get rejuvenated after eight conference games.”

On Vernon Carey: “He has counter moves – counter moves are great if you’re doing them against one guy. I don’t think anyone has come up with a counter for double and triple teams. That’s what’s happening to him. If the three-point shooting keeps going well then, he’ll have more room. Part of the reason we have more open threes is because of Vernon. When he runs the court, people are going to go to him. That gives a window of opportunity. In Matt’s case, he was a little slower with that window earlier, so they could recover to him. His prep is quicker and if he keeps going like that – then that’s a great counter with Vern. Vern has – it’s tough to move down there. As long as he’s running – he just has to stay patient. He did a great job tonight with just running and making sure the defense had a plan.”

“It’s definitely big to bounce back like this tonight. There’s definitely some things that we can learn from this past week and put it behind us, but we’ve got to learn from it.”

On what Duke can do over the next week during this break from games until next Tuesday against Pittsburgh: “Just keep building on tonight. It felt like how we’ve been playing, not the past week but before this. We’re trying to just continue that, learn what we can do better, and prepare for the next game”

On what Duke did differently tonight compared to its previous two games: ”I think it just starts with the energy that we had coming out tonight. We had a lot of energy tonight, came out on all cylinders, our talk was there, our defense was there, and it translated to us hitting shots on the offensive end. Definitely, when we do the things that we can control, like talking, playing defense, flying around like that, rebounding, it definitely translates into our offense. We wanted to get back to having a hungry mindset. We definitely got away from that for a little bit, but having that hungry mindset, coming out in attack mode, and having that for the whole 40 [minutes]. I definitely think it starts with me being sharper. As a leader of the team and the point guard, turning the ball over and things like that definitely starts with me. Just trying to be sharper, set guys up better, but then just coming out from the start and having the energy and being locked in from the start and not having to adjust mid-first-half or not having to wake up with Coach [Mike Krzyzewski] yelling at us.”

When asked how good Duke can be if it hits three-point shots like it did tonight: “This team would definitely be dangerous, when everyone’s being aggressive like that, looking for their shots, taking them when they’re open. We all believe in each other and we all have that confidence, so we’ve just got to keep doing that, keep looking for our shots, keep being aggressive and confident, just keep coming out from the tip and doing it from the jump every time.”

“I just had open shots to start the game. That really opened my game up for driving lanes or other put-backs. Knocking down my first shot just made me feel really confident.”

“It meant a lot to us [to win tonight]. Losing two straight – first of all, we don’t want to lose at all, and losing two straight really hurt us. We just had to get back to practice yesterday. Going forward, we have the week off but we’re just going to stay aggressive, stay in the gym and just keep working and get ready for Pitt.”

“Practice has been really competitive the last two days and we just had to carry that over into the games. The first couple of minutes against Louisville, it was very tough for us but we just had to fight back and bring the energy [tonight].”

“I’m just shooting the ball with a lot more confidence. It took a little bit to get my shot off, but once I get into my groove, every shot that I shoot, I feel like it’s going in.”

Opening Statement: “Well, our game plan was to pack in the pain and give them threes. I guess we did a good job of that, because we sure got them to shoot the three, they made 9 of 17 in the first half, [and] when they score 27 points from threes in the first half, you know your defense is in trouble. I thought we got some decent shots early in the game, some of [the missed shots] must have to do with Cameron Indoor Stadium and the student support, the fans cheering like crazy, because we missed some golden opportunities early in the game, and the score was like 16-6 in about three minutes time, so once we dug ourselves a hole it was all she wrote.”

On other factors that hurt them in the game: “We are kind of a team that shoots a lot of shots off the bounce. We’ve done a research project about catch-and-shoot shots and we’re like 12th in the league in that category, but we happen to be first in the league in making shots off the dribble. But when you’re being pressured like the way Duke is able to [pressure], every guy is quick enough to keep us from beating them, and then they play great help defense. So, we’re not able to make the shots against them that we are against many of the teams we face.”

• The game marked the 29th meeting between Duke and Miami, with Duke leading the series 11-7, including 4-1 in home games.

• The Blue Devils now have a three-point field goal in 1,078 consecutive games, which ranks as the second-longest active streak in the nation (UNLV – 1,089 games).

• Miami’s 24 points in the opening frame marked the fifth time this season Duke has held its opponent to less than 25 first-half points.

• Tonight was the 10th game this season in which nine or more Blue Devils recorded at least one point.

• As a team, Duke had seven blocked shots – its eighth game this season with seven or more blocks.

• Duke committed just 10 turnovers – the fifth time this season committing 10 or less in a game.

• Freshman Matthew Hurt went 8-of-11 from the floor, including 4-of-7 from three-point range, for 22 points. It was Hurt’s third 20-point performance this season. He also hauled in six rebounds and tied his career high with three blocks.

• Hurt’s career high in points is 25 versus Boston College.

• Sophomore Tre Jones netted 16 points on 6-of-13 shooting with six assists and six rebounds, marking the sixth game this season with both five-plus assists and five-plus rebounds.

• Duke has the week off and returns to action on Tuesday, January 28 to battle Pittsburgh at Cameron Indoor Stadium at 9 p.m. ET on ESPN.