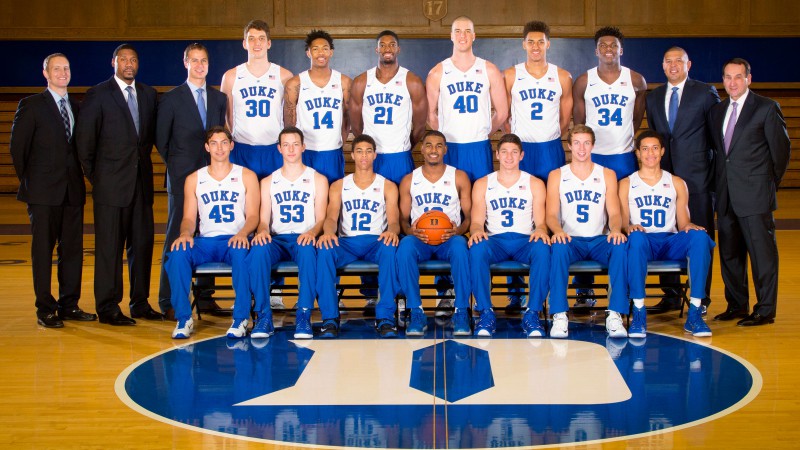 Article by @RandyDunson: An Upside Down Year: A Big Picture View of Duke’s Season Through Week 12

By Randy DunsonJanuary 29, 2016No Comments

An Upside Down Year: A Big Picture View of Duke’s Season Through Week 12
By Randy Dunson

An Upside Down Year

This is the first of two articles. In the first, I will look at the state of Duke basketball, and college basketball, from a big picture view, and I do mean big! I will briefly look at comparisons from other top programs as well. A key word here is “parity”. The second article will be more Duke-specific and use lessons learned from the Miami game to focus on steps that the team might take going forward this season to right the ship.

March Madness has come early this year and I mean it. Even the ‘bracketologists’ have already come out of the woodwork and starting to seed teams in the NCAAs. Really?! College basketball’s current iteration is about as crazy and chaotic as Donald Trump losing his hair. What we really have here folks is parity, not just down years for some teams, but true parity across the NCAA.

Through Week 12, five different schools have been ranked No. 1 in the Associated Press poll, and all of them have lost at least twice. Five of this week’s Top 10 were so lightly regarded not so long ago that they failed to crack the preseason Top 25. Some of the game’s most reliable brand names have been taking a beating and the last team to take a loss (SMU) is ineligible for the NCAA tournament.

The defending national champion figures to fall out of the Top 25 for the first time since 2007 after losing four of its last five games. Michigan State, ranked No. 1 less than a month ago, has since suffered a three-game losing streak. Kansas, which has won 11 consecutive conference titles, is currently tied for fourth place in the Big 12. Therefore, are these teams just having a down year or are we seeing more in-conference or overall parity?

Unless you have a problem with parity, this is interesting stuff. It is better to have a bunch of relatively equal teams exchanging bruises than to bear witness to a static group of superpowers demonstrating their superiority. It is better to watch basketball when the outcome is as much in doubt as is the point spread.

Granted, there are those in these parts who would much prefer that the home team won every game by shutouts, but dynasties are not usually conducive to drama. Though there were not a lot of complaints lodged in Lexington last season as the Kentucky Wildcats were winning their first 38 games, the major polls were a study in stagnation. Only nine different schools cracked the AP’s top five throughout the course of the 2014-15 campaign.

Already this season, there have been 13 different Top 5 teams, and only Kansas has been a constant presence in that five. Texas A&M, unranked in the preseason polls, owns a two-game lead over Kentucky in the Southeastern Conference. Louisville, unranked in the preseason polls, stands third nationally in Ken Pomeroy’s most recent ratings. Moreover, if you saw all of that coming, you probably ought to consider rolling the dice in Las Vegas.

As Kansas coach Bill Self put it last week, “You’ve got six teams in our league that can win the league”. “I mean, not go to the NCAA tournament, win the league”. “And you may have more than that…Sixty percent of the teams in the league, you could go to Las Vegas right now and there would be people that would be wagering on them to win the league.”

How is that not a huge benefit for basketball? How can it hurt to engage and excite fans accustomed to getting steamrolled by Duke or Kansas or Kentucky or North Carolina? How many times must “One Shining Moment” serenade the same usual suspects before opponents start to feel like so much set decoration?

There is nothing wrong with sustained excellence, but college basketball reached a troubling point last spring when Duke and Kentucky both advanced to the Final Four with three freshmen destined to leave school as first-round NBA draft choices.

Neither Mike Krzyzewski nor John Calipari should be faulted for signing precocious players. Neither man had a voice in the NBA’s collective bargaining agreement, and no competent college would have passed on Jahlil Okafor or Karl-Anthony Towns as a one-and-done proposition.

Yet in winning so big with teams dominated by short-timers, Coach K and Coach Cal made college basketball look almost too easy. They made it appear as if their recruiting advantages were so significant that they could bring in a completely new cast without losing continuity; as if one season was sufficient to develop a team of championship caliber.

Happily, it is harder than that. Not all blue-chip recruits pan out immediately, and not all of them are able to avoid injury. Duke has not been the same team since it lost senior PF Amile Jefferson to a foot injury last month. By far, their incoming freshman class, minus one, has turned out to be much more of a class in development than many fans expected.

In addition, Kentucky’s preseason hype was predicated on the flawed premise that freshman center Skal Labissiere could produce on a par with his one-and-done predecessors Anthony Davis, Nerlens Noel and Towns. Three times this season, Labissiere has failed to score. Twice, he has failed to snag a single rebound. The 6-foot-11 freshman played only four minutes in Saturday’s game against Vanderbilt, missing his only shot and being charged with two fouls.

Since talent often trumps development, Duke and Kentucky cannot yet be counted out as Final Four material. What makes this college basketball season so exciting, though, is that there’s no team that can be counted in.

I'm an avid Duke basketball fan since birth! When not keeping tabs on the team, my other interests include college basketball, golf, reading, gardening, & birdwatching. My mantra is "Prid pro quo."

My Gut Reaction to Jalen Green Signing a G-League Deal